Candace Reusch, BSN, and Jennifer Crane, RN, owners of Zero Gravity Med Spa in Crestview Hills, KY, are happy to be getting back into the swing of things at their popular medical aesthetics practice, but their recent return from an important welfare mission left an indelible mark that neither woman will soon forget. That mission sent them both hundreds of miles away from family, friends, and comfort to the front lines of the COVID-19 pandemic.

When the reality set in back in March that their practice would no longer be able to see patients due to governor’s orders amid the outbreak, the two veteran nurses knew exactly what they had to do. Crane, who formerly worked as a travel nurse, reached out to the CEO of her previous company to inquire how she and Reusch could lend their combined 20 years of nursing experience to help with relief efforts. Only two days after that phone call, the pair were on their way to the particularly hard-hit state of Florida to offer aid.

“We literally left Zero Gravity on a Wednesday and drove 16 hours to Florida that Friday,” Crane said.

And what they thought would be a week-long trip ended up being a much more sizeable expedition.

“We thought we were going to be gone a week, but we were gone for nine weeks,” Crane continued. 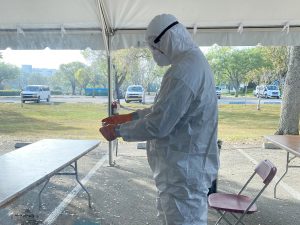 Work commenced the moment they arrived as both women’s leadership skills were immediately put into play in overseeing testing sites and establishing mobile hospitals throughout Florida, including Orlando, Fort Lauderdale, Miami, Fort Myers, Palm Springs, Tampa, and Jacksonville, among other cities.

Reusch admitted that when they first arrived, she couldn’t help but be alarmed by the evident seriousness of the situation.

“To me, that was extremely scary walking in our very first day into this mobile hospital and you see all of these people in hazmat suits and you have no idea what’s going on,” she said. “People are telling you all different kinds of things. As you’re seeing the setup, it literally looks like you’re walking into this crazy crisis situation. It ended up not being that exactly, but it was still just a scary feeling.”

But any fear quickly took a backseat to the nurses’ innate sense of duty and willingness to help. And they certainly had their work cut out for them. Both women were immediately placed in management roles, which they said kept them extremely busy.

In addition to overseeing the mobile hospitals and directing daily operations at testing sites, the women had another very important job at area nursing homes, which were particularly hit hard by the pandemic. 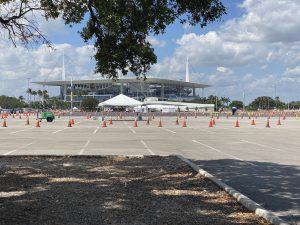 “We would go and educate the nursing home staff and test the residents,” Reusch said. “The nursing homes down there are flooded with the virus.”

Crane said she’ll never forget the moment when the severity of the situation for the elderly population dawned on her.

“The very first long-term care facility site that we went to, the staff had taken nine deceased out in one day,” Crane said. “So that was more shocking for us. These people in long-term care, once one person gets it or a staff member gets it, it’s game on and everybody gets it. That was really kind of eye-opening for me. I admit I didn’t really worry about contracting the virus so much personally, but it was 100% very worrisome for the elderly population.”

But even though concern was more with the elderly population, the ladies admitted that their own safety did creep into the back of their minds a time or two. Still, they forged ahead in their work. However, it became obvious that any fears they may have had about contracting the virus themselves were not unfounded.

“Our nurses were getting it,” Reusch said. “One nurse would have it, and then they’d have to test everybody in her car and they would have it. So nurses were having to be quarantined and stuck in their hotel rooms literally not allowed to leave.” 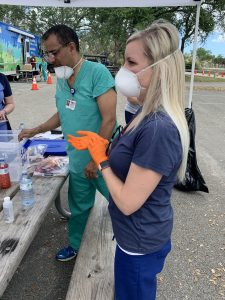 Luckily, the majority of cases for their peers were far less than dire. But that didn’t mean some cases weren’t cause for concern.

“Everybody ended up recovering fine, and a lot of them didn’t have symptoms,” Reusch explained. “But there were a few that we were afraid we’d have to take them to the hospital. There was one nurse that we were really worried about. She was really bad off, not yet to the point that we needed to take her to the emergency room, but she was definitely our one case that we were most worried about. She was young and had no prior health issues but still became very ill.”

Thankfully, that young nurse’s health slowly began to improve. And with the dangers and overall uncertainty surrounding the virus, Reusch and Crane said quite a few nurses let fear get the better of them amid the chaos of the situation.

“There were a lot of nurses who said, ‘I didn’t sign up for this. I’m not comfortable taking care of that patient,’” Reusch explained. “And Jenn and I just said, ‘We’ll do it. We have the proper PPE (personal protective equipment). We’re here. We’re not going to NOT take care of these patients.’”

Though there’s no question the doctors, nurses and other medical staff have difficult jobs in fighting the pandemic, Crane and Reusch were quick to sing the praises of some unsung heroes who have yet to share in the spotlight.

“You’re with the National Guard, so the nurses worked very closely with the military,” Crane said. “The entire time Candace and I were there, we both said the people not getting enough credit were the military. They protect the nurses. They’re on every single mission we go on. They fed us. They tested right alongside of us, and you don’t hear about them as much. They’re just fantastic. They were there to keep things running safely and smoothly.”

“And on top of that, they’re in full gear, all of their PPEs, and you’re in hot Florida weather,” continued Reusch. “At the Orlando site, they were dropping like flies. They were just dehydrated and overheated. They most certainly did not get enough credit.” 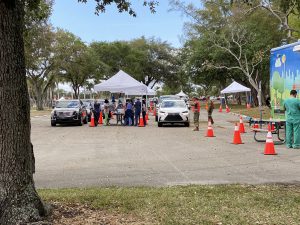 Although both women were proud to do their part, they admitted that the extended time away from their families, who were nothing short of supportive, did start to take a toll.

“The last few weeks took a really big toll on me,” Reusch said. “Until you get back home to some kind of normal, you don’t realize how much you really miss it.”

Crane even missed the first several weeks of her new granddaughter’s life, so coming home was all the more precious.

“So for me, it was pretty overwhelming,” she said. “I really started to struggle at the end in missing my family. I really felt isolated. It was so good to come home.”

Zero Gravity reopened on June 1, and its owners said they couldn’t be happier with how patient and understanding their clients have been, especially with all the new safety protocols the practice now adheres to in keeping people safe. After seeing the effects of the virus firsthand, Reusch and Crane understand more than ever the importance of protocols like social distancing, sanitizing, and disinfecting, to name a few. 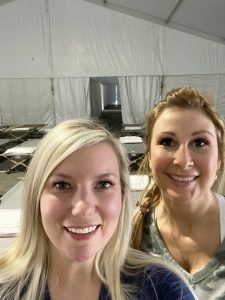 “It’s nice to be back, and it really is awesome how flexible our clients are,” Crane said. “We have not had one complaint with all the restrictions we’ve had to put in place. People have been super flexible. A lot of people said ‘We waited for you guys.’ Even though other places had already opened. So it’s pretty awesome. We’re very fortunate.”

But even in returning to some degree of normalcy, Reusch and Crane said it’s hard to turn off their nurse’s instincts that continue to compel them to lend a hand during the ongoing health crisis.

“I have different waves of emotion about it,” Reusch explained. “Obviously, our business is open and I want to be here. But, at the same time, there’s still a big part of me that wants to keep doing my part to help.”

Both women are in agreement that if the situation presented itself again in which their nursing skills were called upon, they wouldn’t think twice about rising to the occasion, no matter the uncertainty…and they’d do it together again as a team.

“We both definitely had our moments,” Crane said. “But you know, overall it was an awesome experience. And yes, I said this is why we became nurses, that we should do this, this is our opportunity to give back. We would do it again, 100%.”

Need to schedule a treatment? Use our online appointment book and pick the time and services right for you.

At Zero Gravity Med Spa, we offer free consultations to everyone. Click to schedule yours today!